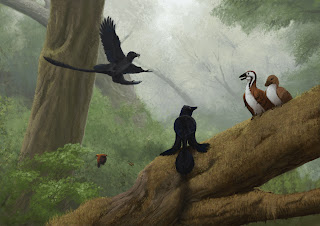 It's been exactly 2 months since the last update! I changed the name of my blog some time ago, so now it's the same like my username on DeviantArt.
Anyway, it's time for some paleo again. 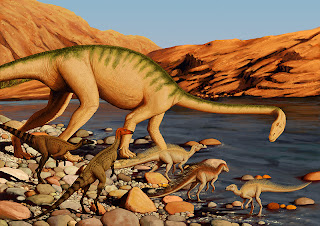 Massospondylus, Lesothosaurus and Heterodontosaurus. I don't really like drawing sauropods, but I had to rest from feathered theropods. (So now there are "feathered" heterodontosaurs instead.)
The color scheme was a nightmare; I hate using vivid colours, but I wanted afternoon lighting in that particular scene. What I enjoyed most was painting the rocks:D

Here are some steps:

Sometimes I'm too lazy to do proper research and make a lot of mistakes. You can see that the Massospondylus was too thin, with thin forelimbs and weirdly positioned tail. Everything was corrected later, thanks to the great guys from the dinozaury.com forums. Constructive critique from competent people is always a big help and motivation.

Here's a preview of another work: 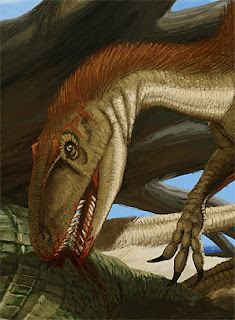 It's already been finished, but I can't to show it fully yet. Again, it's a collaboration with Kahless.

Microraptor and Jeholornis. Microraptor need a lot of work, it's hard to draw a fully black creature in this kind of lighting. The pattern on jeholornis' head and neck will most probably be changed, I don't like those stripes now that I look a them.